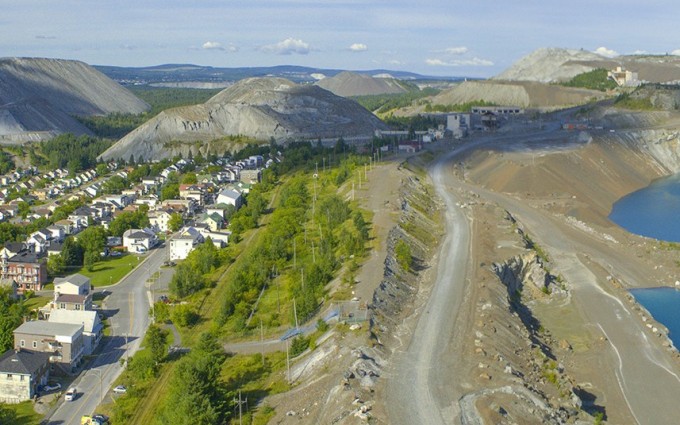 On December 15, 2016, the Canadian government announced its pan governmental approach to asbestos management in Canada. Under the aegis of the Environment and Climate Change and Health departments, this project's goal would be to develop a draft regulation document that, in conformity with the Canadian Environmental Protection act (1999), would ban all new activities related to asbestos and asbestos-containing products. That would include the fabrication, use, sale, sale offer, importation and exportation of asbestos.

I am a Canadian citizen and I live in Adstock, a municipality close to Thetford Mines, Quebec. I have worked on the asbestos fibre file for more than 40 years and I have an in-depth knowledge of all the amphibole and serpentine fibres-related issues, including the well-established differences between the different types of fibres in terms of their chemical structure and their real hazardousness for people's health and the environment. I am also the President of the International Chrysotile Association (ICA), a reputable, well-known organization both in Quebec and many producing and consuming countries. I am also familiar with all issues pertaining to the potential risks associated with the use of alternative fibres and products.

The ICA is a private, international, not-for-profit organization whose aim is to promote a controlled, responsible and safe use of the natural chrysotile fibre, a well-known mineral which has now been used in a very responsible manner for several decades.

Since the beginning of the 80s, successive Canadian governments have defended and wholeheartedly supported the safe use of all minerals and metals, including of course the use and production of the mineral fibre called chrysotile. Through the Chrysotile Institute, a tripartite organization (governments, unions, industry), the federal and Quebec governments invested more than C$55 millions to ensure the promotion and defense of the program for the safe, controlled and responsible use of chrysotile, with remarkable success. I would like to remind you that the issue was always defended with conviction by our political representatives, namely by Minister Ralph Goodale in his presentation at the Chrysotile Symposium that was held in Montreal in 1997.

For years, I was a board member at the Institute and I can proudly bear witness to the exemplary collective will, actions and efforts that went into developing ways to safely use this natural fibre, here and around the world. Of course, as any other mineral or metal extracted and used here in Canada, it carries a certain level of risk for human health. However, when it comes to safe and controlled use, science teaches us that when a person is exposed to an environment containing 1f/cc of chrysotile, the risk for human health is so low that it becomes, for all intents and purposes, non-measurable. It is on that basis that I now allow myself to intercede with the authorities responsible for the Canadian government's chemical products management plan.

I therefore wish to intervene officially and hereby present you with a certain number of important issues, with the hope of prompting the responsible Canadian authorities to conduct a rigorous analysis of this file. It is of utmost importance that a scientific analysis be conducted in order to allow for a well-informed decision on asbestos and chrysotile.

I carefully read the consultation documents on the government's proposed approach to the banishment of asbestos and of products containing asbestos. You have already received my observations and comments that I submitted in a letter dated January 23 2017, which I am attaching for information. I will therefore not expand on the topics raised in that letter. I would however request that you consider them as being an integral part of the present letter.

I would like to comment on your stated opinion that can only be surprising for anybody who is aware of the facts on this subject matter. To reserve similar treatment to all types of asbestos fibres simply has no credible basis. Current scientific research clearly establishes that there are significant differences between various amphiboles fibres and chrysotile, whether one considers their chemical properties or their true risk level for human health. These differences are recognized in the ILO Convention 162 titled "Safety in the Use of Asbestos", which was published in 1986. It calls for an end to the use of amphiboles and a safe and controlled use of chrysotile. It also invites countries who wish to use alternate products to do so, but only after these products have been scientifically analyzed to confirm that they are more secure and truly entail less risks for human health.

The International Rotterdam Convention follows a similar path. Amphibole fibres can be found on the PIC list (chemicals for which all commercial uses have been banned or severely restricted). One can't be surprised by the pitched battle led by countries which have banned the use of chrysotile who have been trying for over ten years to have chrysotile included in this list.

As you know, in this crusade, they find themselves shoulder to shoulder with the anti-asbestos lobby. You will have noticed that their interests cover many issues other than human health. Furthermore, to my knowledge, neither the World Health Organization (WHO) nor the World Trade Organization are calling or have called for a banishment of serpentine - chrysotile - fibre. If such WHO document calling for a worldwide banishment of this fibre does exist, please let me know.

Here I would like to be clear on my position, which has nothing in common with declarations, comments or extrapolations that have been cast aimlessly in all directions.

If the government really wants to play a useful role in this file with regard to its' health implications, I would respectfully suggest that Canada should start by immediately banishing the use of all amphibole fibres. This is what the most recent scientific data invite us to do.

As per serpentine chrysotile, I would propose that a controlled, responsible and well regulated approach is the way of the future, as it is for the use of all products, substances and mixtures known as carcinogenic for humans, including 118 of them that have been identified in the Group 1 of substances by the WHO's International Agency for Research on Cancer (IARC).

A genuine consultation process cannot ignore recent scientific data and must be immune to any undue influence or to perceptions fed by a well organized crusade. Our American neighbours have decided to give themselves a 6 years' analysis and reflection period in order to gather all the necessary information that will form the basis of a well reasoned decision on chrysotile: a decision by Canada to similarly take the time to review all of the issue's scientific dimensions would be totally justified.

On page 12, the consultation document shared during the May 18th, 2017 Webinar specifies that the proposed regulations would prohibit THE USE OF MINING RESIDUES FOR CONSTRUCTION AND LANDSCAPING ACTIVITIES. It is quite obvious that such a sentence can only lead to confusion in any reader's mind. The government should carefully measure the impact of such prohibition. It is quite likely that on top of creating a new series of administrative burden for our region's community leaders, it would seriously hamper the possibility of attaining the laudable goal of a promising regional economic development plan.

It would therefore be quite extraordinary if, so to speak, a possibility of using a back door to bring a project to fruition would be opened while the front door has been shut. One can only imagine the rise of righteous brigades which would be hard at work in order to block any industrial development that could possibly be linked to a banned activity. This doesn't make any sense. The above-mentioned paragraph should disappear from the proposed regulations.

I would also add that this whole consultative process is in itself lacking in many ways. It is governed by obvious biases, with the clear objective of obtaining the communities' consent for a project which is likely to get off track because it will have been ill-conceived. Its timeframe is much too short. We've been rushed into it for reasons that remain unexplained, but that definitely should be a source of worry.

There has been no real exchange with the concerned communities. A webinar can't replace a series of town hall meetings where face to face exchanges take place in a context that leads to a better understanding of those communities' needs. This is how things should be done, even if the process is more demanding. The issues at stake lie right here, and it is here, not elsewhere, that they profoundly impact people's daily lives. While we don't share them, we can understand the government's political motives but the fact is that political decisions that will eventually be made on these matters will determine our communities' economic and social future.

Political leaders should not let themselves be distracted by the siren songs that, for more than two decades, have been part of an unhealthy crusade of dubious origin against everything associated with the word "asbestos".

To ban chrysotile and to replace it with loosely regulated products or fibres whose innocuousness and real risk level for human health have not been scientifically established would be irresponsible and downright dangerous. Such flawed approach will create a false sense of security among workers and the general population. Replacing an available resource such as chrysotile with another substance will not in itself guarantee security and ensure success. Once the political decision will be made, it will be difficult to pretend that from now on all Canadians will truly protected. Banishment must be implemented if it becomes unavoidable and necessary to protect people's health but not for the sake of banishment itself, which is what the anti-asbestos crusaders are aiming for.